Theme: Continuing to live in view of the coming of Christ

What was your first paid job? How long or hard did you work at it? What did you do with the money you earned?

1. On a scale from 1 (high anxiety) to 10 (blissfully peaceful), where would you rate your sense of God's peace now? Where in particular do you need group prayer and support?

2. How are God's love and Christ's perseverance needed in your life now?

3. What have you found helpful in encouraging you to pray for missionaries? For whom do you regularly pray? What types of pressures may he or she face in that part of the world?

4. Are you idle, a busy-body, a worrywart or a workaholic? What is God's message to you in 2 Thessalonians? 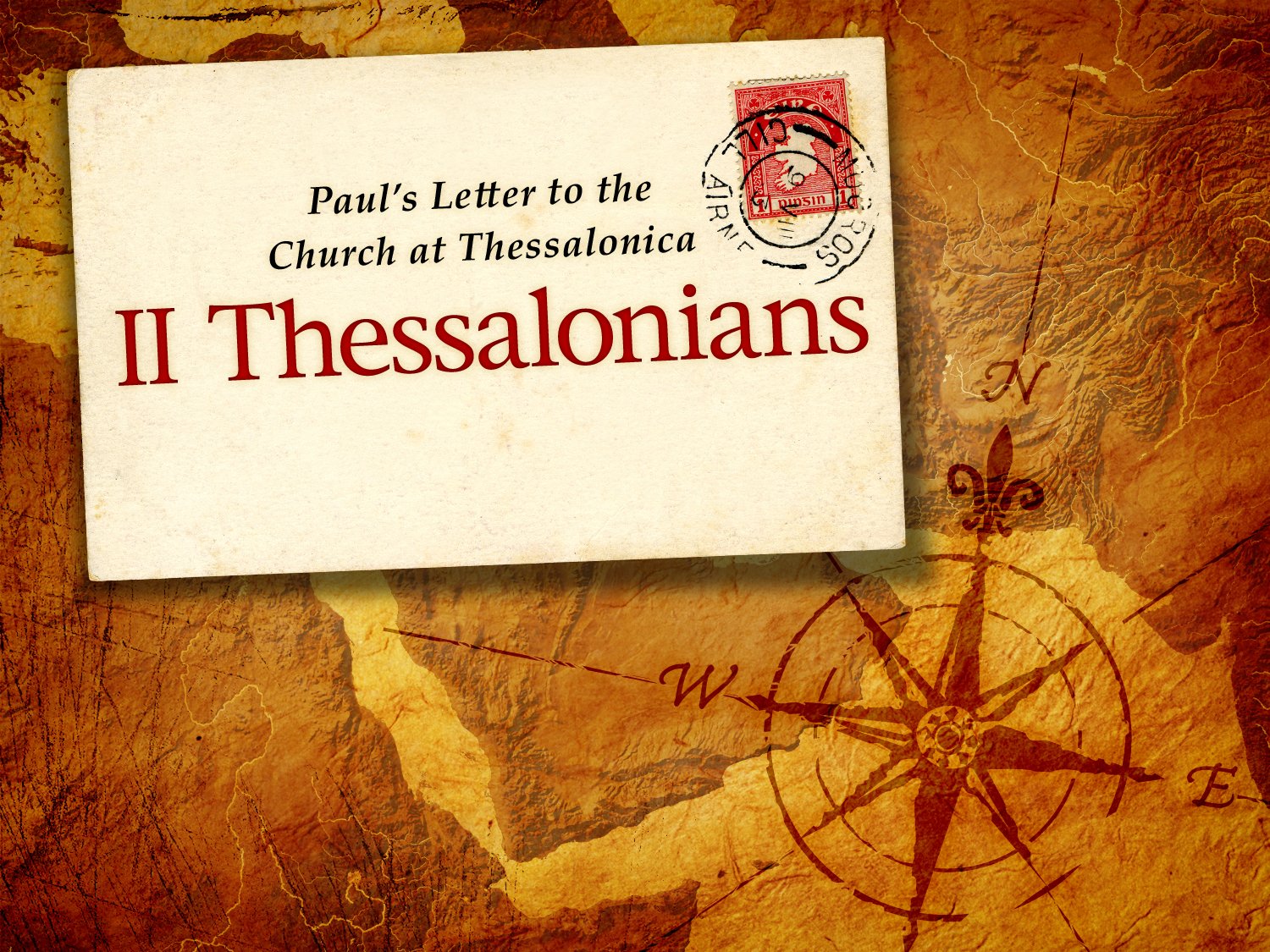 As a result of my conversational study in 1 and 2 Thessalonians, I choose to pursue the following transformative life action:

As for other matters, brothers and sisters, pray for us that the message of the Lord may spread rapidly and be honored, just as it was with you. And pray that we may be delivered from wicked and evil people, for not everyone has faith. But the Lord is faithful, and he will strengthen you and protect you from the evil one. We have confidence in the Lord that you are doing and will continue to do the things we command. May the Lord direct your hearts into God’s love and Christ’s perseverance.

Just as before, Paul concludes his letter to the Thessalonians with a request for prayer. It's a humble petition, perhaps enough to persuade even his fiercest critics to relent. Paul's focus is not on himself. He asks for two simple things: 1) the gospel will continue to "spread rapidly" with honor and 2) that he and his companions will be "delivered" from those who wish to do him harm. In verse 5, Paul centers his request around two unfailing promises: God's love and Christ's perseverance. The love of God covers his past and produces peace in the present. Christ's perseverance steadies the present and offers hope for tomorrow. The commentator William Barclay summarizes, "With the love of God in his heart and the strength of Christ in his life a man can face anything."

In the name of the Lord Jesus Christ, we command you, brothers and sisters, to keep away from every believer who is idle and disruptive and does not live according to the teaching you received from us. For you yourselves know how you ought to follow our example. We were not idle when we were with you, nor did we eat anyone’s food without paying for it. On the contrary, we worked night and day, laboring and toiling so that we would not be a burden to any of you. We did this, not because we do not have the right to such help, but in order to offer ourselves as a model for you to imitate. For even when we were with you, we gave you this rule: “The one who is unwilling to work shall not eat.”

We hear that some among you are idle and disruptive. They are not busy; they are busybodies. Such people we command and urge in the Lord Jesus Christ to settle down and earn the food they eat. And as for you, brothers and sisters, never tire of doing what is good. Take special note of anyone who does not obey our instruction in this letter. Do not associate with them, in order that they may feel ashamed. Yet do not regard them as an enemy, but warn them as you would a fellow believer.

Now may the Lord of peace himself give you peace at all times and in every way. The Lord be with all of you. I, Paul, write this greeting in my own hand, which is the distinguishing mark in all my letters. This is how I write. The grace of our Lord Jesus Christ be with you all.

Paul concludes his letter with a strong warning to a group of Christians in the Thessalonian church who have grown lazy, even entitled. They have stopped working (likely under the assumption that Jesus Christ is coming shortly). It demonstrates how much they greatly misunderstood Paul's teaching on the Second Coming. They presupposed that Christ's coming was an END (so why keep working?). It's why we need to be careful not just in predicting the Second Coming but also in how we respond and behave in these "last days." Paul likely has supernatural insight on this matter. He knows the "end" is not in sight yet. It's still in the future and so he commands these lazy Thessalonians to get back to work. He notes they moved from being "busy bodies" (working) to becoming "busybodies" (idle gossipers).

To argue his position, Paul reminds the Thessalonians of how he worked hard when he was among them. Now we have no idea what Paul did. We know in Corinth that he used his skills in tent-making to earn an income (Acts 18:2-4). Actually, as a rabbi, his disciples should have met his physical needs. Part of their job was to raise the funds so their rabbi could teach them without needing to worry about income. This is how Jesus' ministry operated:

After this, Jesus traveled about from one town and village to another, proclaiming the good news of the kingdom of God. The Twelve were with him, and also some women who had been cured of evil spirits and diseases: Mary (called Magdalene) from whom seven demons had come out; Joanna the wife of Chuza, the manager of Herod’s household; Susanna; and many others. These women were helping to support them out of their own means (Luke 8:1-3).

The disciples of Jesus used their own skills to generate income for Jesus to lead and teach them. Essentially Jesus was a school of one professor and the students paid their tuition through their abilities, talents and resources. Peter, Andrew, James and John were fishermen. They likely caught fish for their master. Lazarus, Mary and Martha opened their home for him to enjoy extended stays. Matthew was a wealthy tax collector who could've easily financed some of Jesus' ministry. Even Judas Iscariot had financial skills. He was in charge of the "receipts and payables" for Jesus' ministry (John 13:29).

Like Jesus, Paul was a rabbi who was helped by his disciples, particularly the churches he started and discipled from a distance via his letter-writing campaigns. During his ministry in Philippi he converted Lydia (a seller of purple dye) who likely supported his work through sharing the great wealth she had earned in her lucrative dye business. Paul attracted many wealthy people to his teaching and ministry. In very few places did he need to resort to secular work to meet his basic needs. He lived off offerings given to his ministry and various resources that helped him (like a three-story house in Ephesus or a special hall in Corinth).

Paul writes to the Corinthians and reveals the source of his income for mission and ministry work:

Was it a sin for me to lower myself in order to elevate you by preaching the gospel of God to you free of charge? I robbed other churches by receiving support from them so as to serve you. And when I was with you and needed something, I was not a burden to anyone, for the brothers who came from Macedonia supplied what I needed. I have kept myself from being a burden to you in any way, and will continue to do so (2 Corinthians 11:7-9)

With the Thessalonians (and later the Corinthians), Paul does something that few rabbis did. He found a secular source of income. In Corinth, again, it was tent-making. However, in Thessalonica, we don't know what Paul did to earn his keep. Nevertheless, he reminded the Thessalonians that in a perfect world that they would've paid for the right to have Paul instruct them (2 Thessalonians 3:9).

In America there is a long history of paying the clergy for their services. There's also a long tradition of supporting missionaries who are called to work in places and for people who cannot fully support them. I grew up in a church that gave nearly 20% of the income it received in offerings to missionaries and mission work (local, national, international). Since the 1980s the "mission dollar" (budget) of most American churches has shrunk dramatically. I also grew up in a home where missionaries regularly stayed. My family personally supported favorite missions. And we helped organize "mission festivals" at our church to spotlight various missionaries and Christian workers. Unfortunately, very few churches now give even 10% to foreign missions, Christian organizations, Bible colleges and other faith-based organizations. Consequently, America now has the fewest mission and ministry organizations (including Christian colleges) since the great "missionary movement" sprouted 300 years ago. Very few Christian young people now enter full-time Christian ministry and even fewer pursue nonprofit mission work. In fact, we now have other countries sending their missionaries to America!

It's been my long practice and teaching to encourage my own students (disciples) to give 10% (a tithe) of their gross income to KINGDOM WORK. And as the Lord blesses your giving (and He will!), give a greater percentage. Just know that these gifts need not all go to the local church where the person attends. Rather, consider giving HALF of your percentage to your church and the other HALF to various ministry and mission organizations. Give directly to local mission work (food bank, crisis pregnancy center, homeless shelter). Give to a teaching institution (Bible college, Christian school, nonprofit educational service). Give to national and international missions (Compassion International, Samaritan Purse, Focus on the Family, Mission Aviation Fellowship). Perhaps you'll even consider standing with MANNA! Educational Services International to help me create inspirational and instructive training and resources for churches, Christian schools and faith-based organizations.

Paul concludes his second letter to the Thessalonians with one of, in not his briefest, of closings. In most of his later letters, perhaps because his ministry and work is continuing to grow, Paul spends a lot of time sending "greetings" to various individuals in Rome or Corinth or Colossae. We see none of that here with Paul. He closes fairly abruptly--almost like he needs to get this letter in the mail right away!

He does not close, however, without his autograph attached. Evidently this is, as Paul himself states, a personal "distinguishing" feature for all his letters. It's how these Thessalonians can know it's Pauline in origin. They can trust his signature and his teaching.