If you’re looking for an irreligious, agnostic or Deist “Founding Father,” then many claim that Benjamin Franklin (1706-1790) is the poster child. After all, this influential scientist, patriot and diplomat is famously labeled a Deist…and for good reason. It was Franklin who wrote that despite his religious upbringing, that around age fifteen, he grew skeptical of Christianity and “became a thorough Deist.”

A “thorough” Deist. Those are Franklin’s words. Case closed. End of story. 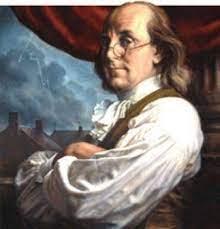 Since Deists reject the divinity of Jesus, miracles and biblical revelation, Franklin is obviously no Christian. And since Franklin further confessed adolescent skepticism about the orthodox doctrines of Christianity, he’s practically agnostic by today’s standards.

Maybe the case is closed. Or is it?

Over the decades, countless ink has been spilled on this influential Founding Father.  To their credit, more honest historians have observed that Franklin’s religion was eclectic, self-styled and personal. Ultimately, it’s difficult to confine Benjamin Franklin to any religious frame, including Deism.

But is there a deeper truth? Let’s let the facts speak and review original writings, proclamations and speeches by Franklin himself.

First, Franklin was neither irreligious or agnostic. To the contrary, he was more religious than many American Christians today. Franklin grew up in the strict Presbyterian tradition. However, like many of his peers, he struggled with the rigid religious traditions and denominationalism that permeated American Christianity in the mid-1700s. Consequently, Franklin found Presbyterian sermons “uninteresting, and unedifying,” lacking moral principles. It seemed, Franklin concluded, that his pastors desired for their flocks to be “more Presbyterian” than solid citizens. Consequently, he matured to avoid church services. Rather Franklin committed his Sundays to personal biblical study, including the reading of printed sermons.[1] Like George Washington, Franklin also found kinship with Freemasonry—a fraternal organization that blended good works and God. The Masonic Lodge in Franklin’s day was decidedly Christian in its focus, unlike modern Masonic views that trend more esoteric, even occultic.

Second, Franklin remained marked by Christianity. There’s evidence that he gleaned much of his pithy wisdom from the Old and New Testaments. Franklin’s popular series Poor Richard’s Almanac (1732-1757) was packed with proverbs, including one that many erroneously believe is biblical: “God helps those who help themselves.” The reality is Franklin’s Christian background informed his actions and politics. He may have eschewed traditional Christian doctrine and openly criticized hypocrisy, but he certainly didn’t abandon all biblical truths.

Ben Franklin’s “religion” was a self-styled brand that preferred no particular religious box. It’s clear he never skewed toward agnosticism. After all, religion and faith remained evident in what he said, how he led and what he produced.

In a 1750 letter to Dr. Samuel Johnson, the president of King’s College [now Columbia University], Franklin wrote that building a new church “is not properly dividing but multiplying” the opportunity for more people to “worship God.” Franklin noted that another church building would “accommodate” those who “go to other places, or stay at home.”[3]

Franklin penned a recruitment pamphlet for Europeans seeking to send their kids to America. He described our mid-1750s Christian colonial culture as one with no bad behavior by the youth. He noted “that serious religion, under its various denominations, is not only tolerated, but respected and practised (sic).” But Franklin went even further. He said that atheists and nonbelievers were “rare and secret.” In fact, America was so Christianized that Franklin observed Americans could live “to a great age” and never personally meet “either an Atheist or an Infidel.” Franklin extolled how America’s Christian culture produced “mutual forbearance and kindness” and a “remarkable prosperity” that has brought “favor” to the nation.”[4]

Essentially, Franklin saw America as a place where religion—namely Christianity—was prevalent, thoughtful, respected and productive. And he, unlike contemporary secularists, took no offense at that reality. Rather, he applauded the contributions of religion in American life.

Whatever his Deist views of Jesus’ divinity, Franklin’s appreciation for the Galilean guru were clearly laudable. He wrote: “As to Jesus of Nazareth, my opinion of whom you particularly desire, I think the system of morals and His religion as He left them to us, the best the world ever saw or is likely to see.”[5] In his 1789 autobiography, the now elder Franklin cited thirteen virtues that guided his life—including frugality, silence, temperance and cleanliness. His top virtue? Humility… which he noted, in part, needs to “imitate Jesus.”[6]

Franklin also pursued various spiritual disciplines like prayer, charity, service and, later in life, church attendance. He confessed to praying every day, including a petition for Divine strength, wisdom and blessing upon his work. He declared he “was never without religious principles…never doubted…the existence of the Deity; that [God] made the world, and governed it by his Providence.” Franklin noted the importance of “doing good to man” and a belief in both a final judgment and eternal life.[7] This latter doctrine unequivocally shows that Franklin had abandoned the “Deism” that he once accepted.

He even gravitated back to church attendance.

In an exhaustive biography, historian and professor Carl Van Doren detailed both the influence of Franklin’s long involvement in Freemasonry as well as Franklin’s latter church experiences. Van Doren recorded how Franklin’s family owned a pew—one that still exists—at the famed Christ Church (Episcopal) in Philadelphia, PA. It’s where Ben Franklin attended Sunday church with his family, listened to sermons and watched his two youngest children get baptized. Both his parents, his wife and Franklin himself are buried at Christ Church. He even financed his ministers’ salaries, supported building programs (including a new steeple) and helped with church accounting.[8]

Franklin described in his Autobiography a friendship with the famed revivalist George Whitefield. Franklin regularly attended Whitefield’s crusades (observing how some crowds were 30,000 strong). He printed a number of Whitefield’s sermons and journals. In fact, Franklin was so impressed and influenced by Whitefield that he financed a special auditorium solely for Whitefield’s preaching services…then later donated that space to the University of Penn’s for its first educational facility.

One of Benjamin Franklin’s most famous statements occurred during a fiery debate at the 1787 Constitutional Convention. Franklin initially implored how prayer was critical to the Convention’s political process, then he encouraged Congress to hire chaplains to lead daily prayers and Bible study. Finally, he observed how important Divine Providence was to America’s emergence:

“I have lived, sir, a long time and the longer I live, the more convincing proofs I see of this truth–that God Governs in the affairs of men. And if a sparrow cannot fall to the ground without His notice, is it probable that an empire can rise without His aid?”[9]

In 1778, Franklin wrote this glowing description of America to the French: “A Bible and a newspaper in every house, a good school in every district…the principal support of [America’s] virtue, morality and civil liberty.” Another time Ben remarked “Whosoever shall introduce into public affairs the principles of primitive Christianity will change the face of the world.”[10] None of this sounds like the rhetoric of an irreligious man or anti-Christian secularist. The agnostic Thomas Paine, a contemporary of Franklin, never uttered similar sentiments. It’s equally remarkable for a traditional Deist (who denies revelation) to speak so highly of the Bible. It’s why modern historians who secularized Franklin’s religion as agnostic, Deistic or even anti-Christian are not just revising history, they’re inventing it.

In general, Benjamin Franklin was never a faithless man. He believed in God and, despite his early Deist and episodic Masonic dispositions, maintained a lifelong appreciation for Christianity. Yes, he struggled with the divisiveness, pomposity and hypocrisy among the Christians of his day, but Franklin always valued and affirmed how Christianity helped American culture. As his life ended, Ben Franklin attended, to what degree we cannot say, a Christian church in Philadelphia and was eventually buried in that same church’s graveyard.

If there’s an obvious truth, it’s that Benjamin Franklin’s faith is hard to define—particularly 230 years after his passing. It’s likely that spiritual ambiguity is exactly what Franklin desired.

Indeed, like a lightning strike on a kite string, his religion proved just as unpredictable, unique and, to a degree, shocking. At best, the Christian-influenced Franklin strove toward a Masonic goal of moral perfection. For this Founding Father, religion, it seemed, was a good friend to guide and guard his life.

Essentially, God helps those who help themselves.

[6] Franklin added “and Socrates” as someone else to model.

[10] As quoted in George Bancroft, History of the United States, From the Discovery of the American Continent (Boston: Little, Brown and Company, 1866), Vol. IX, p. 492.