Share about a time when rumors were spread about you. Or a moment when you failed and had to face the consequences.

1. List the characteristics of a faithful Christian worker given in this passage. Which do you possess? Which do you want to develop?

3. What turns you off about the way some people present the Gospel? How are you attempting to avoid these mistakes and yet maintain a strong witness?

4. What opposition to your faith are you facing? What encourages you to persevere?

As a result of my conversational study in 1 Thessalonians 2, I choose to pursue the following transformative action: 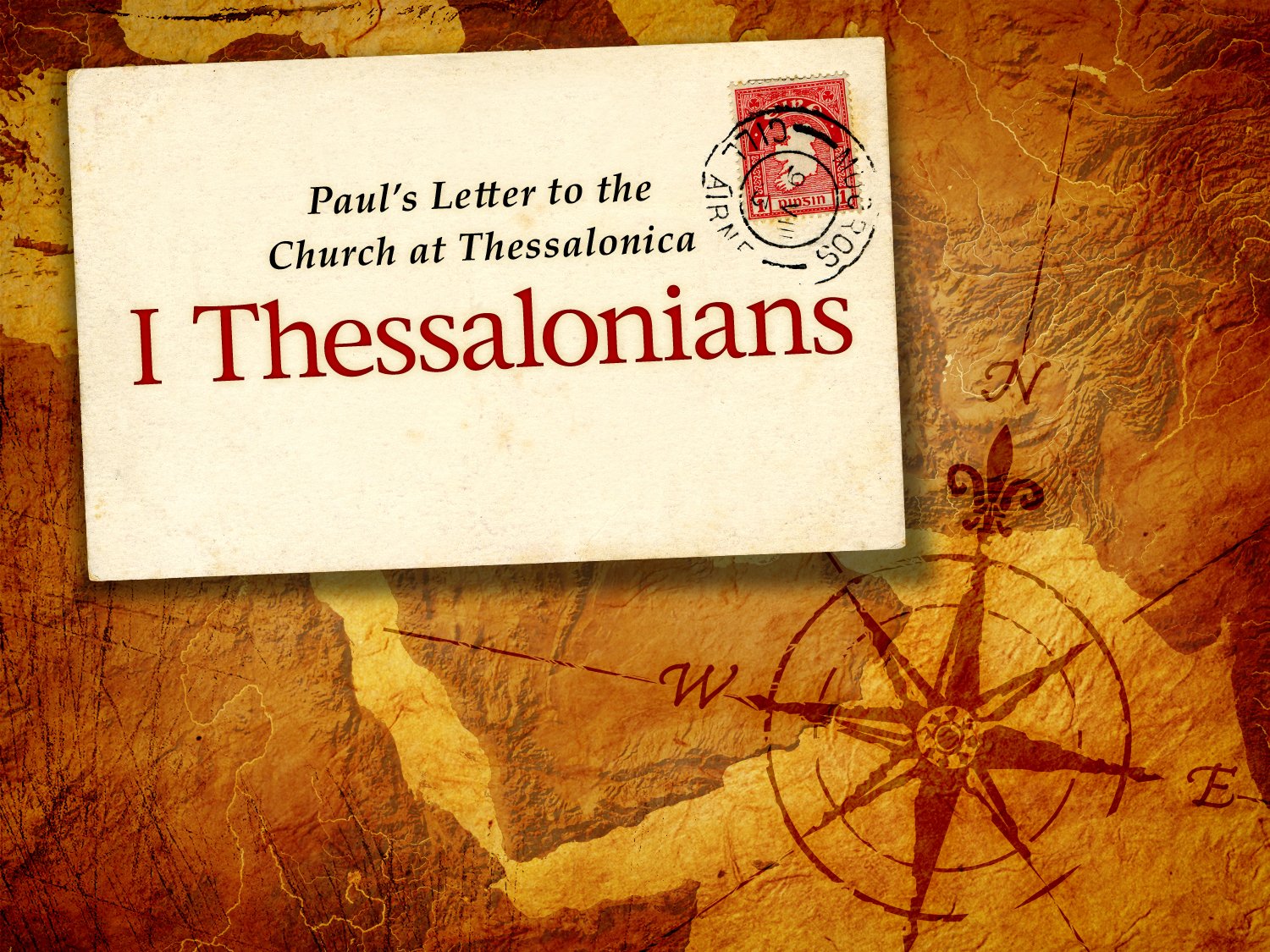 In 1 Thessalonians 2, we discover the slander, opposition and criticism of Paul. We already know how he was abused and imprisoned in Philippi (2 Thess 2:2; Acts 16:16-40). Certainly this opened the door for critics in Thessalonica to point out Paul's "police record." He was an outlaw on the run after all. Why would anyone listen to someone of such ill repute? And don't forget that Paul had to escape from Thessalonica in the dead of night, running for his life. The only ones who do that have a reason to run.

Consequently, in 1 Thessalonians 2:3, Paul is slandered with three distinct charges by the non-believing Jews:

In 2 Thessalonians 2:4 Paul was charged with pleasing men over pleasing God. Undoubtedly, this was due to Paul's message of Christian freedom and grace. Paul preached a gospel of joy that stood in stark contrast to the Stoic (somber) religion of the Greeks and the legalistic seriousness of Judaism. Grace was a pleasing idea to men, as was the notion of liberty.

Paul is also accused of preaching for his own gain (1 Thessalonians 2:5,9). The Greek word for "flattery" (kolakeia) speaks to flattery for personal advantage. This was not an uncommon thing in the early church. The Didache (The Teaching of the Twelve) is an ancient and early book (c. 100) instructing churches in right practices. It makes the following statement: "Let every apostle that comes to you be received as the Lord. And he should stay one day and, if need be, the next also, but if stays three days he is a false prophet. And the when the apostle goes out, let him take nothing save bread until he reaches his lodging. But if he asks for money, he is a false prophet...If he comes as a traveler, provide lodging as far as you can. But he should not remain with you longer than two or three days unless there is necessity. But if he desires to settle among you and be a craftsman, let him work and eat. But if he has no trade, as far as you know, do not allow him to live idly among you, being a Christian. But if he will not do this, he is a Christmonger: of such men beware (Didache, chapters 11-12)."

Paul is also charged with seeking prestige (1 Thessalonians 2:6). Paul actually counters this idea in 1 Thessalonians 1:5 when he states "our gospel came to you" rather than "I came to you." Paul was totally focused upon the MESSAGE of Jesus Christ. He cared not for prestige. He did not want to be lifted up. He only desired to make Jesus known and exalted.

Finally, in 1 Thessalonians 2:7, Paul is accused of being dictatorial. Perhaps some Thessalonians--both within and without the church--misinterpreted Paul's strong personality. He was a hard-charging, type A, strong-willed leader. Remember how he refused to allow John Mark to travel with him on this particular missionary trip (Acts 15:36-41). That incident caused such a "sharp disagreement" that Paul lost not only John Mark but also Barnabas, a faithful encourager to his mission.

For the Thessalonian believers this new faith has brought nothing but trouble to them. Paul's encouraged these infants in Christ with tender loving care. He understood the cost of following Jesus (who was crucified himself as an innocent man).

Nevertheless, Paul indicts the Jews in particular (who are the ones primarily persecuting this young church) by cataloging their sins:

Paul will tell these Thessalonians that due to the Jews insolence, arrogance and violence against Jesus and his followers that "the wrath of God has come upon them at last (2:16)."

In fact, Jesus often taught about this "coming [day of] wrath" as a judgment upon the Jews for their unbelief, apostasy, spiritual adultery and pride. Just days prior to his crucifixion, Jesus displayed his own "wrath" against the abuses he witnessed in the temple (Matthew 21:12) and harshly warned of the hypocrisy by the Pharisees and Sadducees (Matthew 23). He informed his disciples (enamored by the temple) how this grand edifice would one day be destroyed (Matthew 24:1-2). When his disciples wanted to know the "signs" of this coming destruction, Jesus prophesied about "birth pangs" like wars, famines, earthquakes and persecution (Matthew 24:4-13). In a parallel passage to these apocalyptic signs, we receive a deeper, more helpful clue as to WHEN this coming judgment and destruction might happen (Luke 21:20-23):

“When you see Jerusalem being surrounded by armies, you will know that its desolation is near. Then let those who are in Judea flee to the mountains, let those in the city get out, and let those in the country not enter the city. For this is the time of punishment in fulfillment of all that has been written. How dreadful it will be in those days for pregnant women and nursing mothers! There will be great distress in the land and wrath against this people."

Essentially, all the signs for this "day of the Lord" judgment were pointing towards Jerusalem and her beloved temple. And that makes sense. There are weeds in the wheat that need to be removed (Matthew 13:24-30, 36-43). There are goats among the sheep that need to be judged (Matthew 25:31-46). As Paul reveals to the Thessalonians its the non-believing Jews that will face their own "day of the Lord" judgment. They believe all is well. In 51 AD they still have their temple, priests and animal sacrifices. They still have their city, their festivals and their traditions.

But all that will change in the summer of AD 70.

History has taught the Jews that nothing has been the same in Jerusalem or with their religion after that date. In a matter of months, the Roman army (under Titus) will break through the great walls of Jerusalem, invade the city, kill Jews without regard and desecrate the holy temple. Over 1.1 million Jews were killed in this assault upon Jerusalem alone--mostly because Rome used the Passover (when the city was clogged with outsiders) to invade. The historian Josephus, in his Wars of the Jews, documents this horrific period of time and the end of Judaism as they knew it.

This historical event helps Bible students to interpret eschatological passages. We live after the fact of this destructive AD 66-70 series of events. We can understand, historically, what Jesus was referring to and what Paul was speaking about. It makes sense to us. The Thessalonians, on the other hand, were living less than two decades from this "coming wrath" against the Jews, their city and beloved temple. All they knew was it would be a time of "great distress" (or tribulation) and its specific target was "this people" or the Jews. It's why we can safely assume that Paul's revelation of a "wrath that has come upon them [Jews] at last" is likely pointing to AD 66-70.

After all, with each passing day, the Jews (who don't accept Jesus as Messiah) are experiencing the "last days" of the Old Covenant. They will see its final end in September AD 70 when Roman armies demolished Jerusalem completely and her temple forever. With this "end" biblical Judaism as we know it is over. No more temple, priests or animal sacrifices. And, let's be honest, because of Jesus there is no longer a need  for these Old Covenant features (Hebrews 9:11-28). Jesus is now our High Priest (Hebrews 3:1; 4:14; 6:20). The Hebrew writer pens this "end" also introduced a "new" covenant that made "the first one obsolete; and what is obsolete and outdated will soon disappear (Hebrews 8:13)." Hebrews was penned in the mid-60s AD...only a few years before this "wrath" and final judgment that came upon Jerusalem in AD 70.

It's important to "pocket" this idea of "coming wrath" because the Thessalonians, more than any other New Testament church will want Paul to further explain it to them. They will also become victims of false prophets who claim "Jesus has already come again (in judgment upon the Jews). Many will live idly waiting for Jesus' return. And these young believers will also want to know more about this "resurrection" connected to the event. We'll keep coming back to this idea throughout our Thessalonian study.

It's unfortunate that many "end time" views miss this obvious event (the destruction of Jerusalem in AD 70). But Jesus clearly prophesied about it and told his disciples that it would happen in their lifetimes. In Matthew 16:28 he says some of his followers will experience it personally!  Later, in Matthew 24:34, Jesus will say that "this generation" (his first-century generation) would not pass away before the destruction of Jerusalem. The apostle John was told that he wouldn't die until this event happened (John 21:21-23). And John was, indeed, the only disciple to live beyond AD 70.

Final thought: don't get too "raptured" (caught up) by all these "end-time" and "last days" scenarios. Sometimes we need a history lesson instead to help us better understand. The Scriptures are actually fairly understandable (even the prophecy sections) but not when they are misapplied and interpreted through events the Scriptures never intended. There's a reason the Thessalonian church was a bit confused and excited about what they were learning. The "wrath of God" is a heavy topic, but so are references to a "resurrection of dead saints" (1 Thessalonians 4:13-17), a "day of the Lord" judgment (1 Thessalonians 5:1-11) and a "man of lawlessness (2 Thessalonians 2:1-12)." 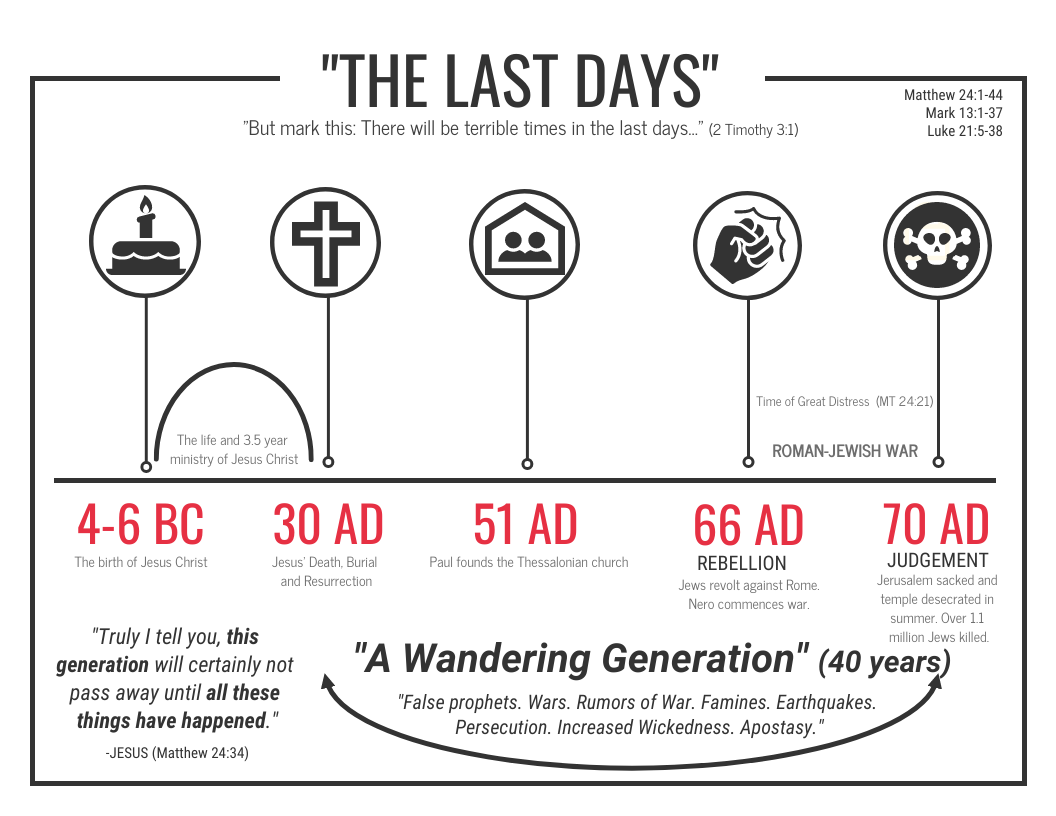 This epistle has been called "a classic of friendship" because of Paul's deep affection for the Thessalonians. Paul employs two metaphors at this point: